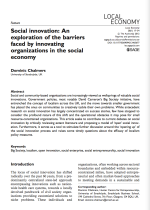 Many governments around the world are exploring ways of shifting the locus of social innovation from a centralized state-led approach to local communities. It makes a lot of sense: It can empower people, utilize local knowledge, create customized solutions and reduce costs. But Dominic Chalmers*, from the University of Strathclyde, argues that this shift would require recognizing some significant barriers.

The net effect, Chalmers warns, may “hasten the ‘fizzling out’” of interest in social innovation and it never realizing its potential.

Chalmers argues that these barriers might be overcome by drawing on an “open” paradigm and in particular the study of open innovation (citing writers such as Chesbrough). Researchers have demonstrated how some businesses have benefited from dramatically rethinking their approach to developing new ideas/products. Instead of generating all knowledge in-house, companies that adopt an open innovative approach invest in looking outward, beyond their organizational boundaries, and develop learning networks.  Open innovation is also associated with privileging user involvement – directly involving consumers/customers in new solution development. The overall result for some has been radical innovation. Chalmers recognizes that this literature has been largely focused on multinationals and technology companies but believes that it could help to unlock some of the barriers facing social innovation.

In particular an “open” approach could have the following benefits to those engaged in social innovation:

Chalmers argues that for the interest in social innovation to be realized it will require organizations at the front line to adopt a more “open” approach otherwise they may fail to develop transformative solutions and be less effective than centralized models.

“Fragmentation of general welfare and social provision to a patchwork of civil society organizations and private providers can be argued in some ways to be more efficient and malleable to highly localized needs, yet there remains a significant risk that it may falter should the traditional closed innovation paradigm remain the dominant logic amongst socially innovative organizations. If the new wave of socially innovative organizations operate as discrete entities, failing in turn to comprehend the complexity and systemic nature of the problems they are attempting to address, then meaningful social progress is less likely than either otherwise under [sic] a more centralized welfare system that has greater oversight and coordinating powers or under a truly open system of collaborating organizations.”

This is a really interesting paper on a number of levels. It engages with a very real problem of policy – i.e. how to develop a social innovation policy for a country or region that doesn’t just create instances of innovation but instead facilitates systemic changes. The paper also highlights how established ways of thinking about innovation can shape how social innovation is interpreted and developed. Chalmers argues that incremental innovation is likely because commissioners (governments and philanthropists) are risk averse and those commissioned to do social innovation are also operating on a traditional closed model. The solution to embrace an open innovation model is a powerful one.

This insight, however, – the combination of social and open innovation – is not a new one to the world of practice and many practitioners and policy makers are exploring how open models of sharing knowledge can create the conditions for more radical innovation.  Chalmers could have made reference to a range of writings/initiatives on this topic (writers such as Charles Leadbeater and initiatives such as the Collective Impact model and the growth of “Change Labs”).

Chalmers may have benefited from distinguishing between open innovation and open source and delving a little more deeply into the literature and exploring ideas around the “commons” which I think is a more fertile ground than the business literature (i.e. writers like Lawrence Lessig and Elinor Ostrom).

I also think that, interestingly, governments and philanthropists, often associated with conservative approaches to innovation, are frequently driving/initiating disruptive ideas. Chalmers could have referenced the growing interest in impact investing and systemic innovation and explored what is driving this interest, e.g. economic constraints, growing expectations/demands, technology, globalization. I think the question may be less about convincing people of the idea of embracing an “open” paradigm and more about understanding its dynamics (strengths and limitations) and how to create the structures and practices that might enable radical social innovation.

* Chalmers, D. (2013). Social innovation: An exploration of the barriers faced by innovating organizations in the social economy, Local Economy, 28(1), 17-34

Social Innovation in the News